this got the tears going

“‘For my thoughts are not your thoughts, neither are your ways my ways,’ declares the LORD.’” Isaiah 55:8 (NIV)

When the phone rang in the middle of the night, I couldn’t help but wonder if one of my greatest fears had become a reality. It was the police. They were calling to tell us my 21-year-old son had fallen asleep at the wheel while driving home from a friend’s house.

Mitch was only four months old when his biological father died. Since then, I’ve have had two fears; that my son’s life would be greatly affected by the loss of his father and that he would die young, too.

When Mitch was four, one of those fears was relieved. God brought Pat into our lives, filling the role of both father and husband.

Like any good father, Pat is a wonderful man who supports his family in the good times and bad. This night things were bad. When Pat arrived at the scene, he found our son’s demolished car hugging the mangled 50 foot guardrail that had kept him from crossing the highway into oncoming traffic.

Mitch, however, didn’t suffer a single scratch, bruise, or broken bone — not one. His dad was stunned, but the police officer was astonished even more. In fact, the officer had this to say to our son.

“If I were you, I wouldn’t go home and go to bed. I’d go to the nearest church and thank God for saving your life because He obviously has a purpose for it.” It was as if God was speaking directly through the officer. Pat drove Mitch home in silence. The police officer had said it all. What more could he add?

Sunday afternoon, we drove to the junkyard to retrieve Mitch’s personal belongings from the car. The first thing I noticed about the damaged vehicle was the date, 9-9, painted in large orange numbers across the windshield of the mangled car.

That’s when it hit me. Mitch’s accident occurred on the anniversary of his biological father’s death. Stranger still, they were exactly the same age. As my eyes fixed on the date, I realized it was a message from God — an undeniable clear sign from above. Mitch was in the hands of God.

That truth pierced my mind and Satan’s lie was broken. I was no longer afraid of losing my son to death.

God has a different plan for Mitch than he had for his dad. I always knew that truth intellectually but, that day in the junkyard, it became a reality. How could I doubt God anymore when my son walked away from a near death experience on the anniversary of his father’s death? I couldn’t.

Regardless of my doubts and fears, God has a plan. Usually it doesn’t look like mine. This experience reminded me that my thoughts are not the same as God’s thoughts. He sees the bigger picture. He knows His plans. It also taught me to fall on my knees and relinquish all my fears to God while trusting in His good and perfect will for my children.

You see, the only power and control you and I have over any fearful thought is to place it in the hands of God. Doing so keeps us from being taunted day and night by “what if?” Instead, we can rest in the assurance that God’s thoughts, ways and plans are more marvelous than anything we can imagine ourselves.

Dear Lord, help me to see my circumstances through your eyes and not mine. Teach me that your ways are good and marvelous and they can be trusted. In Jesus’ Name, Amen.

The Our Daily Bread devotional for today was on Psalm 55:6 "Oh, that I had the wings of a dove! I would fly away and be at rest." So many times in the last three, four years, actually almost all forty years that we have been married, as we have faced incredible amounts of pain, pressure, hardship, injustice and grief, I have wished I could sprout wings and fly away. But the writer says that Jesus offers a better way. "Rather than fleeing our struggles, he invites us to to flee to Him. He said, 'Come to Me, and I will give you rest. Take my yoke upon you and learn from Me... and you will find rest for your souls.'(Matthew 11:28-29). Rather than wishing we could fly away and escape life's problems, we can bring them to Him."
I need to remind myself of this again and again. It seems like my brain got fried with all the stress and grief and I am so forgetful.
The pain and grief has been so overwhelming. The pain came at us from so many different levels. Why? Why? Why? I need to keep clinging to the promises in God's Word. Some days I feel like I will go crazy. The choice is will I let it break me or make me stronger.
Silent Grief - Child Loss Support:
When our child dies, we no longer know who we are. It's like beginning life all over again....only this time we have to change our identity in a way we never wanted to change. Finding our new self is not easy!
Posted by The Duecks at 7:45 PM 1 comment: 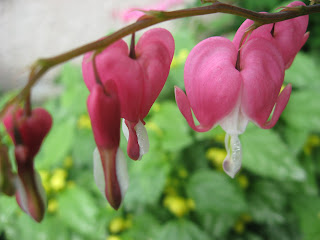 "The entry way to your next chapter will not come to you by attempting the impossible of picking up the pieces of your shattered life. Or by looking at what was in the same glance as you look at what will be.

Please let the hope of bringing back what you once had GO...and start by thinking of a new life unlike anything you have ever had before.

Think of your self as having the ability to hold two hearts inside your body.Your new heart beats faster and with more passion, but not until you start stepping into your new self and identity.

The only way you can do that is by doing something that your old heart could have never done.

And that is how you will give birth to the new beat of your life."
Posted by The Duecks at 8:24 PM No comments:

This blog from Proverbs 31 Ministry was so good that I thought I should post it here. I hope they don't mind.
However, it seems like some problems we have to keep to ourselves and are not free to talk about. But if you feel led to do so, you can pray for our family. Praying for anybody who might read this that we will all be ready to meet the King of Kings, our beautiful Saviour, Prince of Peace and glorious Lord.

Problems. I prefer to keep them to myself. Being fiercely independent, my instinct is to slam the cellar door shut at the first sign of high winds. In other words, no one’s getting in until the storm is past. I’ll let God in, no problem. But you — I keep out.

Over the years, God has challenged me on this independent approach, calling it was it is: pride.

It’s not overt arrogance, but by keeping others at a distance, it implies I’m all-sufficient and don’t need your help. Plus, the insecure little girl in me worries that if you see weakness in my life, you’ll question my competency. As so, I’ve kept to myself, creating a prideful façade of control.

That didn’t work very well, however. Repeatedly, God has called me to a place of greater interdependence with others. He’s worked miracles in my life when I’ve humbly asked for prayer. He’s broken down walls of distance when I’ve allowed people to see the real me. I’ve seen His hand move at the request of my godly friends.

It’s now obvious to me God designed us to work together. We are pieces of the same puzzle, and life makes more sense when we are connected.

There’s a story in the Old Testament that shows God’s plan for interdependence. It’s found in the book of 2 Kings and concerns a widow who had a big problem. She needed resources, but the coin jar was empty. Her husband died, leaving her with no means of support, and a pile of debts she couldn’t pay. Creditors demanded restitution. Since there was no money, they planned to take her children as slaves.

Desperate, she sought help from Elisha, a man known to be set apart for God. Elisha asked her to do something unusual: go to all her neighbors and request empty jars … lots of them. Then, she was to return home, take what little oil she had left and pour it into the jars.

The widow did as Elisha instructed. When she returned home, she started pouring. As each jar filled, her sons brought her another. They filled every borrowed jar with oil. Elisha then told her to sell the oil, pay the creditors and live off the rest. She did.

What I love about this story is that the quantity of the miracle oil was in direct proportion to the number of neighbors she asked for help. If she had asked five neighbors, that’s how much oil she would have had. Ten neighbors meant ten jars. And so on. The more people the widow asked for help, the greater God’s provision.

There’s another part of the story not told by the Bible passage, but I can’t help but wonder if it happened. At some point, the widow would have returned the borrowed jars. When she did, I imagine she would have told each neighbor what God had done for her, and how that neighbor played a part in the miracle. What a testimony that must have been!

God could have worked a miracle in any way, but He chose to involve each member of that little neighborhood. I imagine they were never the same after being part of something so amazing.

This story speaks clearly to me. God often plans to meet my needs through others. Yet if I keep my problems to myself, I might hinder His plan to bless my friends and broadcast His faithfulness. I’m learning to deny the lies of a prideful spirit in exchange for a humble plea for help. I’m trading my fierce independence for God’s plan of community.

Dear Lord, forgive me for the times I’ve kept to myself, believing I have everything necessary to solve my problems. In doing so, I may have missed Your plan for meeting my needs through others. Help me to identify pride and submit it to You. Help me to have a humble and teachable spirit. In Jesus’ Name, Amen.