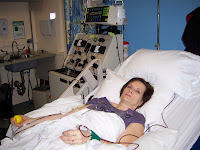 I just made a pot of cabbage soup, accompanied with some tears. I remembered that cabbage soup is what Renee requested me to make for her a year ago. She wanted to make sure I wouldn't make the cabbage pieces too big, so it would be easier for her to eat. She hadn't eaten any thing for a few days. The only thing she had been able to get down was smoothies. Justin actually went and got the cabbage. I was still feeling kind of out of it from donating stem cells, so I said I would make it later. But that never happened. When it became apparent that Renee was having trouble breathing, things went into high gear and I never even ate supper. Had a few crackers when I realized I was getting hungry. So now here we are a year later.
Posted by The Duecks at 10:03 AM 3 comments: